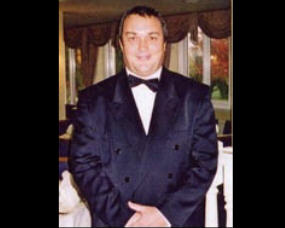 Steve is now into his 18th year as a professional entertainer and has become very popular as an after dinner speaker, due to his ability to tailor his material to the audiences in front of him.

His impressions of everyone from television stars and sporting personalities, mixed with gags and stories about his career, gives you a speaker with a difference. From the stars of Coronation Street to Jim Davison, Jethro, Julian Clary – and his hilarious tribute to Rolf Harris, his act has got to be seen to be believed.

A keen golfer, Steve has participated in many Corporate and Company golf days, taking part in the golf on the day, and using the events of the day as part of his speech after the dinner.

His impressions of Alex Hey, Peter Allis and Seve Ballesteros go down particularly well. Steve will also, if asked, present the prize giving, with hilarious results, which only add to the enjoyment of the day.

Steve has entertained at golf days for: Birmingham City, Northampton Town, Calor Gas, Allibert, J.B.S., Norflex, A.N.C., Rexham and many, many others.

Steve’s talents have taken him far afield including Singapore, for a dinner for Tim Muntons’ benefit year, Monte Carlo for Lloyds T.S.B., Belize, Holland and Germany for Company dinners and golf days. But one of his favourite moments was speaking at a dinner in the House Of Lords in Andy Mole’s benefit year.

He is also very popular at sportsmen’s dinners, and has also worked with many of the top sports personalities on the after dinner circuit and at conferences. At conferences, Steve has been engaged, and provided, a light-hearted ending to the day’s events.

So, in conclusion, if you require a speaker with a difference, along with a wealth of experience, then Steve Tandy is for you!

“It only goes to show what a good comedian you are to put on a show like that and not use swear words or crude language”
Secretary Cleeve Cloud GC.

“Thanks for entertaining our guests so well in the departure lounge and during the flight” – M Nelson, British Airways. “You helped make our evening one to be remembered”
Peterborough Rotary Club.

“an ideal choice for this occasion and was absolutely brilliant & helped make my day. I would respectfully suggest for those employing him to leave the prize giving to him – he brings a completely new angle” David Lyle – Captain, Badgemore Park Golf CLub