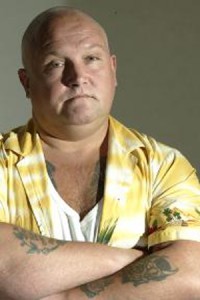 46 year-old Greg Cook’s deadpan style and mastery of the spoken word led John Plowman, head of BBC Comedy to describe him as ‘Les Dawson for the 21st century’.

A prolific writer of comedy, he has several hours of tested material to draw on, but reserves the right to dish up a blistering set drawn from this morning’s newspapers. Religion, politics, sport, terrorism, poetry, the police, philosophy, royalty and his long-suffering mum have all been given the Greg Cook treatment, since he began performing in May 2002.

Open spots on the Manchester circuit have given way to regular headline work all over the UK and as far afield as the Middle East.

He abandoned a law degree after 2 years to devote more time to writing and performing comedy. ‘Law and comedy are essentially the same gig,’ says Greg, ‘telling lies for money. But this way I don’t have to wear a tie.’

CHORTLE REVIEW OF CITYLIFE FINAL 2002 “Cook was unafraid to launch into bang-up-to-date topical material, with gags hewn from the previous days’ headlines…any comic who can coin the phrase ‘back-scuttling the baroness’ has to have a future.”

CHORTLE REVIEW OF LEICESTER MERCURY FINAL 2003 “..showing plenty of signs of future stardom..a heady mix of surreal brainstorms, painful puns and, a real novelty – straightforward pub-style gags that he penned himself..a hugely prolific writer..always delivers something new..often every element of his routine.. his silly logic and deliberately baffling theses won him many fans, and rightly so.”

MANCHESTER EVENING NEWS REVIEW OF CITYLIFE HEAT “Greg Cook was a dead-cert from the moment he opened his mouth – his scary appearance shielding a delightful deadpan comedy routine which saw much of the audience falling off their chairs. Relentless gags, brAilliant delivery. A worthy finalist.”