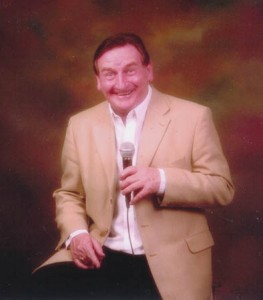 Dusty Young has done it all in show business. Singer, songwriter, musician and actor.

He started off as a big band musician in Ireland and is now one of the top Irish Comedy speakers in the world. His humour is gentle and clean and typically Irish. He also has a nice singing voice and plays Trombone and Penny Whistle, but not at the same time.

Dusty was born in Dublin because he wanted to be near his mother. He is the youngest of 8 children, the neighbours didn’t know if his father was a good catholic or a very sloppy protestant.

His family were so poor that they had to buy all his clothes from the Army and Navy store in Dublin and he found it very embarrassing going to school dressed as a Japanese Admiral, with his mother dressed as one of the Household Cavalry.

Dusty was featured on the “Comedians” on Granada Plus on Sky TV and had his own 30 minute special called “Stand and Deliver” on Sky One. His acting credits are appearing in Sherlock Holmes on Granada television and Afternoon Theatre on BBC Radio 4

Dusty is a match day host at Old Trafford for Manchester United and also travels all over the world and other places working on cruise liners.

His comedy DVD, video and audio tapes are sold worldwide.

“Very Funny, I enjoyed that.” – Duke of Westminster.