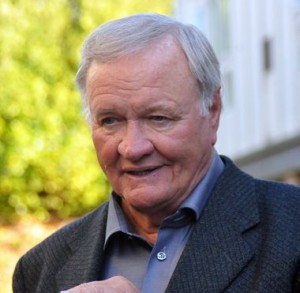 Ron he played over 400 games for Oxford United as they went from the Southern League to Division 2 in five years earning the nickname “The Tank”.

On retiring from playing he became manager of Southern League Kettering where success led to his appointment as manager of Cambridge United in 1974. He led Cambridge to the Division 4 championship in 1977 and was invited to take over at West Bromwich Albion a year later. Although he did not win any honours at The Hawthorns, the club thrived under his leadership with an attractive style of football and in 1981 he was given the opportunity to manage Manchester United.
In his five years at Old Trafford they won the FA Cup twice, in 1983 and 1985, and were League Cup runners-up in 1983. The team never finished lower than fourth in the First Division.

He returned to WBA and then went to Spain to manage Athletico Madrid. Iin 1989 he returned to England to manage Sheffield Wednesday. After keeping them in the top flight in 1989, from a seemingly impossible situation, he somehow contrived to get them relegated the following season. They bounced back in 1991 and also won the League Cup, beating United in the final!

His next club was Coventry City, he arrived in a blaze of glory, banished talk of relegation and within weeks had taken City well out of the danger zone with an unbeaten six match run including a famous victory at Anfield.
He had another spell with Sheffield Wednesday and then Nottingham Forest, keeping the former up in 1998 but failing with the latter in 1999.

Ron then moved into the world of television where he became a popular pundit and co-commentator. Nowadays he does personal appearances and speaks on the after dinner circuit.