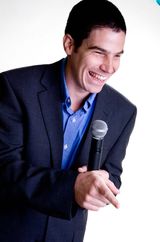 Wrote and performed in his own Radio Wales Comedy series, “Doing It For A Laugh.”

Wrote and performed his own one man show for a 25 night run at The Pleasance during the 2001 Fringe for which he earned numerous acknowledgements.

Guest speaker at the Professional Footballers Association Footballer of The Year Awards Dinner in London, 2000

Winner of Encore Magazine’s “Entertainer of The Year” award.

Appeared on Sky TV’s “The Comedians”

“Unadulterated Comedy on a stick” The Western Mail

“The best of the new bunch” – Bob Monkhouse

“A dazzling new comic” – The Stage Newspaper “His gags are as fresh as the morning papers” – The Stage Newspaper “Just a short note to thankyou very much for Friday night – I have had nothing but compliments about your performance” Willmott Dixon Construction Company “It was an excellent dinner at the Park Hotel, Cardiff, and you were a first class speaker.” The Institute of Measurement and Control