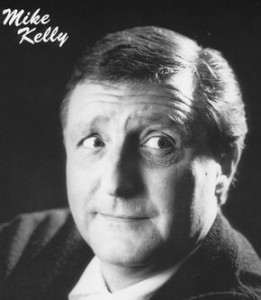 Looking for one of the most experienced ad-lib comedy after dinner speakers then Mike Kelly is for you. His brilliantly quick mind will have your audience in hysterics with his fast off the cuff remarks. Mike, a former insurance broker, tired of paperwork, and dealing with accounts for many national companies, so, like many good Yorkshire men, sent his wife to work to enable him to concentrate on becoming a full time comedian. Therefore, off he set to learn his trade around the many clubs in the North of England. Following national exposure on the highly popular TV series, “The Comedians,” he was soon appearing all around the country in summer shows and corporate promotions, as well as the leading cabaret venues of the day. At this time Mike also found he was in demand as a character actor, by television production companies and has played many roles in a succession of high profile TV series. Mike Kelly – Master of the ad-lib

Nowadays Mike concentrates on the after dinner market, where is popularity has rapidly grown. At home on a golf day, sports dinner or corporate event, Mike’s brand of humour is equally received by all, whether it be all male, mixed or of any age group. He is at his best in a situation where many of the guests are known to each other. Even though the boss may “take a little stick” it is at all times given in the best of taste, and no one will ever find they have been offended against.

Good afternoon I would like to pass on my thanks to our Guest Speaker, Mike Kelly, who attended our Mens Dinner last friday night. Mike’s unique humour and brilliant delivery was so well received by all who were there. As Club Captain I was delighted that the evening went so well and Mike’s routine provided such a fitting finale. Thanks once again. David Lund ( a.k.a David Cameron from now on ) !!!!!!
Captain Knaresborough Golf Club