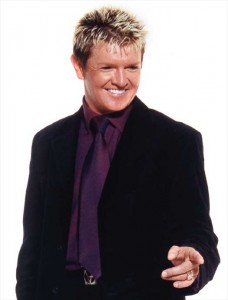 In the past eight years, Martin has fine-tuned his act to the After Dinner market, able to deliver his speech without a trace of smut, or foul language. He can also tailor his act to suit the particular client if needed, and has also presented a host of corporate videos. Martin is also in demand as a TV warm up artiste, having worked on such shows as “This is Your Life”, “Stars in Their Eyes”, and more recently “This is my moment.”. Martin is always immaculately dressed and carries a very professional attitude towards the event. He is a very amicable person both on and off stage. Martin has enjoyed a lifetime in Television, since his days as a star of “Summertime Special” to his regular appearances on the “New Comedians” show.

Looking at Martin it seems impossible that his professional career started over twenty years ago as a stand up comedy impressionist. He quickly progressed into stand up comedy, and subsequently became a big hit with the theatre audiences. During these years, he supported such names as Ken Dodd, Les Dawson, Gene Pitney, Mickey Rooney and Al Martino. Martin completed four seasons topping the bill in Jersey, three in Newquay, and several seasons headlining for Warner Holidays and Stakis Hotels. More recently, Martin has found himself in demand by several cruise lines and in 2001 was a great success in his first pantomime.

Everybody I spoke to commented on what an enjoyable evening they had had without a “Blue” word being spoken. I would definitely have no hesitation in recommending you.”

“I am writing to you in appreciation of Martin Gold’s efforts and, in particular, congratulate him on a good clean performance. His act was well balanced without any vulgarity, swearing or smutty comments – well done and many thanks.”

“Top class comedy entertainment – dispatched a battery of jokes gratefully acknowledged by the audience which he had eating out of his hand almost as soon as he came on stage..”

Martin’s ability to deliver a corporate speech to a corporate audience makes him one of the most popular and busiest after dinner speakers on the circuit today.