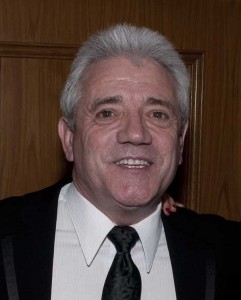 Kevin Keegan, one of the best known names in English football, has an impressive

list of sporting achievements to his name. A European Cup winner with Liverpool FC, a former European Player of the Year, and one of the few players to have both captained and managed England.
Kevin started his career as a teenager with Scunthorpe United but his natural talent as a creative midfielder saw him quickly move to Bill Shankly’s Liverpool FC. At Liverpool, Kevin quickly established his place in the first team, moving from midfield to a striking position and a fruitful partnership with John Toshack. Shortly afterwards came his England debut. With Liverpool he went on to win three First Division titles, two UEFA Cups, and the FA Cup and European Cup.
After 323 appearances and 100 goals for Liverpool, Kevin left Merseyside to become Germany’s highest paid player with Hamburg SV where he was named European Footballer of the Year twice in a row and won the Bundesliga title. Meanwhile internationally, Kevin was appointed England captain, a role he held until after the team’s ejection from the 1982 World Cup. He returned to England playing for Southampton and Newcastle United, helping the latter to promotion in his second season, and then retired from football.
After an eight year break pursuing media and business opportunities, Kevin returned to football as a manager. He also returned to Newcastle, and once again saw the club promoted into the top tier of the domestic game. Noted and admired for his attacking, stylish tactics, he took the team to second place in the Premier League. After leading the table most of the season, a dramatic finale saw Manchester United win the title in the last match of the season. After a spell managing Fulham, Kevin took charge of the England team, a hugely popular choice with press and public. His time in charge, however, ended harshly with a media backlash after the team’s loss to Germany in a 2002 World Cup qualifier.
Quickly afterwards, Kevin then went on to manage Manchester City and a final, ill-fated return to Newcastle United where boardroom controversy saw a swift end to a hopeful appointment. Since retiring from management, Kevin has continued to be involved in coaching football via academies, and as a pundit for ITV and ESPN.