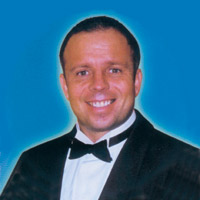 Born in Manchester in 1964, John Stiles was professional footballer, including five years at Leeds United. John will always be known however as the son of Nobby. His father is world cup winning hero Nobby Stiles. For the record, his uncle is European Cup Winner, Johnny Giles.

After finishing his playing career on a high.. with Doncaster Rovers, John set up his own insurance business. Once he had got fed up with that, John then went into the football agency industry, including working for the same management company as the Spice Girls, which is still active now.

For the past ten years John has been working as an After Dinner Speaker and more recently as a comedian. John also prides himself on the fact that his act is very original and funny, with a great emphasis on voices and impressions which sets him apart. He is also proud to say that he can cater for mixed and men-only audiences.

In 2008, John was voted by listeners to TalkSport Radio, as the second best speaker on the after dinner circuit.