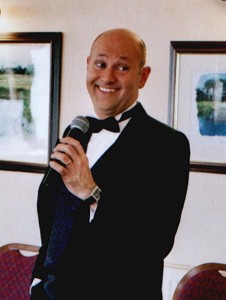 After 10 years fronting top comedy showband “Scholar”, like so many other stand up comedians before him, Jed decided to go it alone. He has never looked back since.

He is equally at home on stage in cabaret as he is speaking at sportsman’s dinners and in the past learnt his solo apprenticeship performing at stag events through to military shows – with everything in between! Indeed Jed is still one of the most in demand comedians to entertain the troops, which has taken him to Germany, Cyprus and the Middle East. He was the resident comedian / compere for the massive 3 day Rhine Army Summer Show for 4 consecutive years – with an audience of over 3000 every day!

In the early days, Jed appeared on Central TV’s “Joker In The Pack” with Marti Caine, and went on to appear on Des O Connor’s “Pot of Gold” before his 1999 appearance on Sky TV’s “The Comedians.” He has also guested on countless Radio and Television Shows in his native Merseyside. (Well he’s from Southport, actually!)

In Cabaret, Jed has performed alongside such legends as The Three Degrees, The Drifters, The Supremes, Alexander O Neill and Leo Sayer to name but a few. In Summer Season he has entertained audiences across the UK and Europe at Haven, British Holidays, Airtours and Thomson Holidays.

In 2001 Jed completed a tour of the Middle East working at such resorts as Dubai Marine Hotel, Grand Hyatt Hotel, Dubai Country Club and The Airport Hotel.

His corporate clients over the years have included BT, Tate & Lyle, Lufthansa, RBS, Allied Dunbar, and even the Labour Party Conference, Blackpool in 2002. Jed’s nutty and cheeky style appeals to all; he is deadly quick but never offensive, naughty but never crude. Best of all he is – FUNNY. Have a great hilarious night out with a star of tomorrow – JED STONE