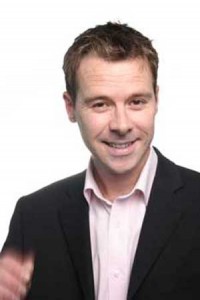 This Wigan based scouser will keep you amused with tales, stories, gags, and all his own teeth.

Since launching himself into the comedy world, Jamie has established himself on the comedy circuit, and has more recently moved to the more traditional setting of mainstream comedy.

An act who has the ability to adapt to suit any event, Jamie has played to audiences of four, up to four hundred. His act is enjoyed by many, and he is very well received playing to mixed rooms.

For an audience who like a comic who is both modern, yet gag filled in his approach, then Jamie is your man.

He is also a much sought after compere, and a popular choice for sportsman’s dinners and corporate events.

What people have said: “
Jamie seems to improve leaps and bounds every time I see himA very capable comedy compere, works extremely hard to warm up a cold audience… A great compere who is very likeable indeed. Has some great material, very funny.Top compere, solid performer”