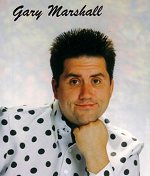 Award-winning comedian Gary Marshall has been a professional now for over 20 years and has established himself as one the most popular comics working on the after-dinner circuit, with his unique style and deadpan delivery it gives him an abundant charm which makes him equally at home with both all male and mixed audiences.

Being a third generation comedian, his Dad Jimmy Marshall (of Granada TV’s The Comedians) and Granddad Jock Duncan (a renown Scots comic) you could say comedy runs in the blood.

Gary’s first TV appearance came in 1988 on “Bob says Opportunity Knocks” – LOST !!!!. He must have made a big impression as his next TV break came 9 years later on Sky TV’s Stand and Deliver. The following year Gary recorded two series of The Comedians for Sky and a Live TV performance on ITV’s Big Big Talent Show – LOST!!!. Victory finally came in 1998 when he won Ready Steady Cook!!!!! – Get In!!!!!

During the last decade Gary has appeared with some of Britain’s sporting greats including: