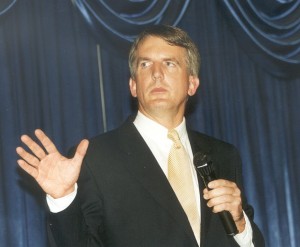 Dr Kevin Jones, a former member of the Heart-Lung transplant team at Papworth Hospital, Cambridge will have you in ‘stitches’ with his hilarious take on the inner sanctum of the medical world.

Qualifying in medicine from Liverpool University in 1977, his career has taken him far and wide – six years at St Barts in London, a one year visiting research fellowship in Colorado and he is and now a practicing Chest Consultant in the North of England,

He has been on the after dinner circuit for the last 20 years and takes a completely non-serious look at medicine through the eyes of a hospital consultant.

Although nothing interferes with his work for the National Health Service and his duties as Medical Officer to Salford Rugby League Football Club, he loves speaking with a passion.

Kevin talks at over 70 dinners a year, many within the corporate world but also uit and is much in demand for business conferences, gala dinners, sporting testimonials, trade associations etc