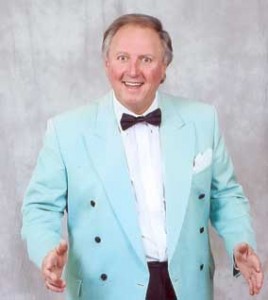 In a showbiz career spanning over 25 years, Barry has now earned the reputation as one of the country’s very best after dinner comedians. Barry first ventured into comedy was as the lead guitarist of the hugely successful show group “Fools Paradise.”

It soon became apparent that the group relied heavily on Barry’s comical timing and as such he took the decision to become a professional comedian – that was over 20 years ago, and it’s a decision he has never looked back on. Today, Barry splits his work between the after dinner sector and cabaret world – happy to adapt his act to suit whichever audience he is put in front of.

Whether it’s a formal dinner or a more relaxed cabaret setting, Barry’s comedy act will appeal to all. His act never deviates from clean comedy – cheeky sometimes but never “blue.” The one part of Barry’s act that is regularly commented on is his ability to work in a completely politically correct manner no matter what the situation. Over the past years he has performed in front of politicians, senior government officials, the police, and clergymen.

Over the years, Barry has entertained alongside some of the country’s best known and loved entertainers such as The Drifters, Bobby Davro, Gene Pitney, Lenny Henry, Bruce Forsyth, Jimmy Tarbuck, Madness and Jason Donovan. Almost every sporting speaker has had the pleasure of accompanying Barry on the top table of numerous dinner events.

Barry is ideally suited to speaking to corporate audiences, whether as keynote speaker at conferences, or to provide light relief after a days training.

Barry’s ability to host is second to none. In a formal situation, Barry will work off script and maintain efficiency and professionalism at all times. As a comedian he is well placed to inject humour where appropriate, or simply keep things as official as is required.

In a more relaxed environment, Barry will work off cuff, whether it’s a wedding, charity dinner or corporate event, working from either the top table, lectern or stage, Barry is at ease in all environments and happy to work to any given brief.

As a host, Barry is there to relieve the stress from the event organiser and the moment he arrives on site, you realise why it was so important to book a professional. He will run the event from start to finish, and where fundraising is key, he will take care of raffles, auctions and fun games but also come up with his own ideas to raise extra funds on the evening – more often covering the costs of his hire on this alone. As an auctioneer he is respected as one of the best – able to squeeze that extra few pounds out of event the most restrained of audiences!